I have had an amazing week!

Just as I expected, the five day intensive to wrap up my ayurvedic studies was exciting, confidence building, wonderful, and intense! I got to spend 5 days with my amazing teacher and 20 like-minded people who became, in a very short time, my family as well as my friends – my “peeps”.

As I have been away from home, immersed in study and then for the last two days on a mini vacation, I have also been given inspiration on what to do next and looked at my present job situation with new perspective.

The first thing I am going to do is start a new blog which will be focused on ayurveda as well as my personal journey in finding it and how it can be useful in daily life.  I think it will be helpful to me to pull together what I have learned by writing about it, with the goal of being able to teach others and have my own clients.

Stepping away from my day to day usual routine and the job that provides me with a roof over my head and food to eat is always a mind bender, and this time even more so. I had set a goal a little over a year ago to quit my job in June of 2016, when I finished with this course. And here it is, June 2016. A few months ago I decided to stay, to not be so drastic, and then things started happening that make me think that I am being guided away. My boss quit, and I was evicted from the office space I’ve had for 4 years due to what is the equivalent of office politics in a hospital.  Middle management isn’t supportive, and upper management doesn’t care, and as I write this, it just makes me wonder what am I holding on to?

I’ve had a tendency to hold on to relationships and jobs long past time to let go and move on, and I think that is what I am doing. Fear, again. Uncertainty, as usual. As difficult as it is, it is the known. But I have a new tool that I gained recently. Instead of fighting with the fear, or running from it, I have learned to make friends with it, to look at it as serving a purpose. And so I will sit with the fear for a bit, talk to it, question it.

I will go back to the job.  I want to take a zen mindset with me. Zen as defined in the urban dictionary:

One way to think of zen is this: a total state of focus that incorporates a total togetherness of body and mind. Zen is a way of being. It also is a state of mind. Zen involves dropping illusion and seeing things without distortion created by your own thoughts.

I’ve had a tendency to try to fight what is inevitable, to act as if I have some sort of secret power to change the minds of management if I just dig in my heels hard enough.  I think I’m done with that. I need to stop holding on to what doesn’t serve me well.

I know, deep down that the timing is perfect for great change. That there is nothing to fear. That walking away from a closed door is walking towards an open one.

You can’t win a battle against those who have no honor. There is no reasoning with closed minds and no persuasion that will open a closed heart.  – mystical Cat tarot card

And now I turn my heart towards home.

I used to be afraid of getting on an airplane. I felt like I had some measure of control, as long as I was on the ground. But to fly, so high above the earth, just riding along as a passenger, putting my trust in airplane mechanics and a pilot I knew nothing about — this was not something that Fear would let me do.

I flew once as a toddler, a trip I don’t remember, and once as a young adult with 3 small children, a 45 minute trip from Dallas to Houston under great duress. I was terrified during the entire flight.

So I traveled on the ground. As a child I was taken on wonderful camping vacations, and the trips I took my own children on were made in a car. In my 40’s, I took up motorcycle riding with my second husband, and learned to ride my own, because I needed to be in control. (as if riding a motorcycle is ever really safe!)  But to fly in an airplane was something I still resisted, in spite of professing in other areas that “God is in control”!

Ten years ago, when I was only 50, I was told by the company I worked for that I was being sent on a business trip. I wasn’t happy about it, and prayed fervently that the plane would stay aloft. I was surprised that the worse thing about the experience was that turbulence was like riding in a jeep on a bumpy road. And God apparently answered my prayers, because I got safely to my destination and home again.

Not too long after that, my oldest daughter moved to Chicago to attend college. And I flew again. Several times for visits, and later for her graduation. And my company sent me on another business trip. I felt like I had entered the space age at last!  But I still fought my fears every time I got on the plane. Then, the opportunity to take a trip to Honduras came my way. It was one of those heart things where you know you just gotta go! This trip would involve two flights over large bodies of water. At least I was well trained from my previous flights on what to do in case of a “water evacuation.”

So I went, my youngest daughter accompanying me. I prayed all the time, the desperate sort of prayer – “don’t let me die in a plane crash!”  When we got to Honduras and had to take a five hour bus trip through the mountains at night, in an old bus at the mercy of a driver who didn’t want to be late, more fear-based prayers were raised to the heavens. Again, God must have heard me, because here I am.

Something happened on that trip. I think that in deciding TO go I finally LET go, and instead of fighting with the fear I acknowledged it and went on anyway. In doing so, Fear lost its power. 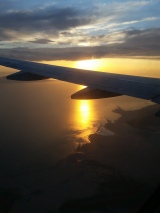 Since that trip, I have flown countless times. And my ideas about God and prayers and fear and giving up control have changed and evolved. I experience the love and protection of God in a much more loving and less fearful way. I still don’t love flying, but I don’t hate it either! I  have seen much more of the world than I could ever have traveling on the ground.

Now, when Fear comes to visit, I say hello. And then politely tell it to go sit somewhere else. “I’ll call you when I need you” I say. And I see a bigger world.

I passed my final test!

Not that I expected otherwise. It is always a relief to get it over with, to get it done.

For the last 15 months I have been immersed in my studies to become an Ayurvedic Practiioner. From the beginning, I have loved it – in fact, I have found my passion!  I have also discovered a lot about my self through this study. I had so many doubts and fears, but as I moved through and past them, my confidence in my own abilities increased and the fear decreased. Making the decision to pursue this course was one of the great turning points in my life.

So here I sit, at 4 in the morning, waiting for my plane. I will be joining my teachers and classmates for the final Clinical Intensive, the end of the course and the beginning of another new phase of my life. I am sure that this intensive, even more than the last, will be a turning point for me, an affirmation that this journey we call life can be meaningful, purposeful, healthy and exciting.