Well, obviously, I’m a lot smarter than I was 40 years ago. I’ve made a lot of choices, and in spite of some of them looking bad at the time, I have no regrets.

As I muse, on the eve of my marriage to the man who will be my third (and last?!) husband, I do ponder my life with some amazement!

I married my high school sweetheart at 19. What babies we were! I thought it was forever, certainly planned for it to be forever. We had a roller coaster ride, and along the way seven wonderful little lives were created and birthed into this world. Certainly can’t regret that!

Midlife came along, and until you are there, and then well beyond, you don’t understand what a midlife crisis is really all about. For me, I had the first realization that life was short and I didn’t want to keep living the life I was living. And the only way I knew to change it, because of the rather narrow vision I had at the time,  was to change husbands.

Now I know that I created my world, and I could have created change in a different and more healthy way. But that’s not what happened, and I got just what I thought I wanted. At 43 I divorced and quickly married again, tried to make it work for 12 years. I had wanted more pizzazz in my life, and I got it, but not in a healthy way. What got birthed through all that was an older and wiser woman! I learned to take responsibility for my choices and learned to make better ones! I don’t regret that!

And I was done with marriage! I was 56 years young, feeling strong, and made plans to have a whole lot of fun that I had missed out on in my pursuit of living the perfect marriage. I minimized and moved, and started living the exciting single life.

I joined meetup, because I only wanted to meet people, not date. Oh no, I was done with men! I went to parties, happy hours, restaurants, went to running groups, did all kinds of things I’d never done. I did get involved with someone, but it was always known that it was just for fun. I  went out with a few guys, but it was more out of curiosity then wanting a real relationship.  Then, only a year after I was divorced, I met Robert.

I’d gone to yet another meetup, at the wine bar down the street. He was there, along with a bunch of other people, and there was no love at first sight. Just another guy. But we met again, at another meetup a week later, and that is when something magical happened. I had this moment when we were sitting at the table talking, and the rest of the world just kind of faded away, like in a movie.

So, long story short, that was four years ago. A year ago Robert proposed to me right before my fabulous 60th birthday. (He threw me a great party, btw!)  I’ve had enough time and experience with him to know that he is the real deal, for me. I know what I want, and don’t want.

The biggest deal is that I am entirely safe to be who I am in this relationship. There’s no big drama, no narcissism. There is a constant love and acceptance, and an understanding that love isn’t always FELT. Rather, love, the marriage kind of love, is a knowing. Knowing that you feel good with this other who is a mirror of your true self. Knowing that life is great lived without a partner, but somehow, with this person, life is a whole lot better.

So, never say never. Be open, be careful, be ready to be surprised!

Am I saying “til death do us part” ? No, not this time. Said it twice before, broke that promise. I fully expect it to be til one of us leaves this body, but saying that just doesn’t seem to be necessary.

I am getting married tomorrow! 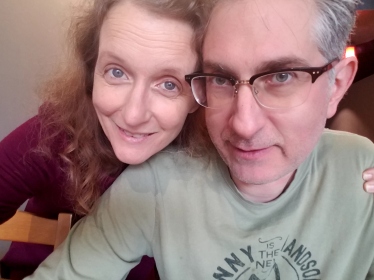