I found my blog from a road trip I took in 2009 with my two youngest kids when they were 13 and 15. It was my first attempt at blogging, and I’m glad I did it because it was fun to revisit those days.

I’m taking three trips this year, and want to preserve the memories, so here goes!

I’m sitting in Houston Hobby Airport waiting to board. The first leg of the trip is a quick hop to Dallas and a plane change. Then on to Des Moines, get a car, and a short drive to Ames, Iowa and my beautiful daughter Rachel.

I look around at the other people waiting. I cannot find a single person who is not using their smartphone —except for that one lady who is reading on her kindle. Texting, listening to music, social media, playing games — and there are a couple of people actually talking on them. Before I took out my pen and paper to write this, I was doing the same thing! Just 20 years ago, the crowd would most likely have been reading books and newspapers. How things change. 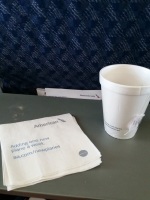 Now I’m writing from the plane on the way from Dallas to Des Moines. The actual flight from Houston to DFW was quick, but definitely  a hurry-up-and-wait operation, as traveling by plane often is. I only had a 50 minute layover, and with all the delays I wasn’t sure I’d make it.

1. The first flight was 10 minutes late.

2. After we landed, we were informed there was a plane in the gate we were assigned to. When we did get a gate, it took at least 10 minutes to get there.

3. I had to wait for my carry on bag. It was one of those small commuter planes, and they “valet” the bags. By the time I had the bag in hand, there were only 20 minutes left before my connecting flight was scheduled to take off.

The Dallas Fort Worth airport is like a small city, and has four terminals. I landed at gate B40, and thanks to Google, knew that I needed to get to gate A9. That was a mini road trip in itself! I and another frantic lady,  who only had 10 minutes to catch her flight took off at a sprint, following the signs to the “Skylink”. We had to go up an unnaturally tall escalator, then caught a talking train (that must have been Skylink). I lost her after that – she was on a mission. I wonder if she made her flight.

I found the signs for gates A-1 to A- 23 and broke into a jog, thankful to the inventor of the rolling suitcase. I was at A -20 and had to pee, but there was no time for creature comforts. It seemed like an eternity until way down the corridor I glimpsed A-12, A-11, A- 10, and yes! finally, A-9. It seemed like another mile but I was there!

No one else was there though, except the woman at the desk. “May I board?” I asked as she glanced up, nonchalantly. She probably deals with this every day. “I’ll call, but I think they were closing the doors.”  As my heart was sinking and she was getting no answer, guess who showed up? The PILOT! Yes! So the door was opened for me, and with great relief I was allowed to board the plane, right before the pilot. “Thank God for donuts,” he joked. I would definitely have to say Amen to that, I thought as I gratefully took my seat.

There was a light rain falling in Des Moines when I arrived, and it was blessedly cool, around 60 degrees. This is my first trip to visit Rachel and her husband since they have lived here. I enjoyed the changing scenery as I drove out of the city, noting large freshly plowed fields. Deep in the heart of farm country, I thought as I neared my destination.

There she is! My heart sang as I saw my dear daughter come out of the house with her little green umbrella. My little girl. So happy to see her and hug her.

After getting settled inside, I told her of my traveling adventures, and we caught up with our lives. She gave me a mandala coloring book, and I gave her a book of Rumi poems. We had a marvelous dinner of bean burritos prepared by Rachel’s husband. We talked about what we might do for the next couple of days, but made no firm plans. Then we settled into a movie. We chose Practical Magic with Sandra Bullock and Nicole Kidman, and it was a great choice – funny, scary, and romantic.

And I went to sleep on the comfy couch.